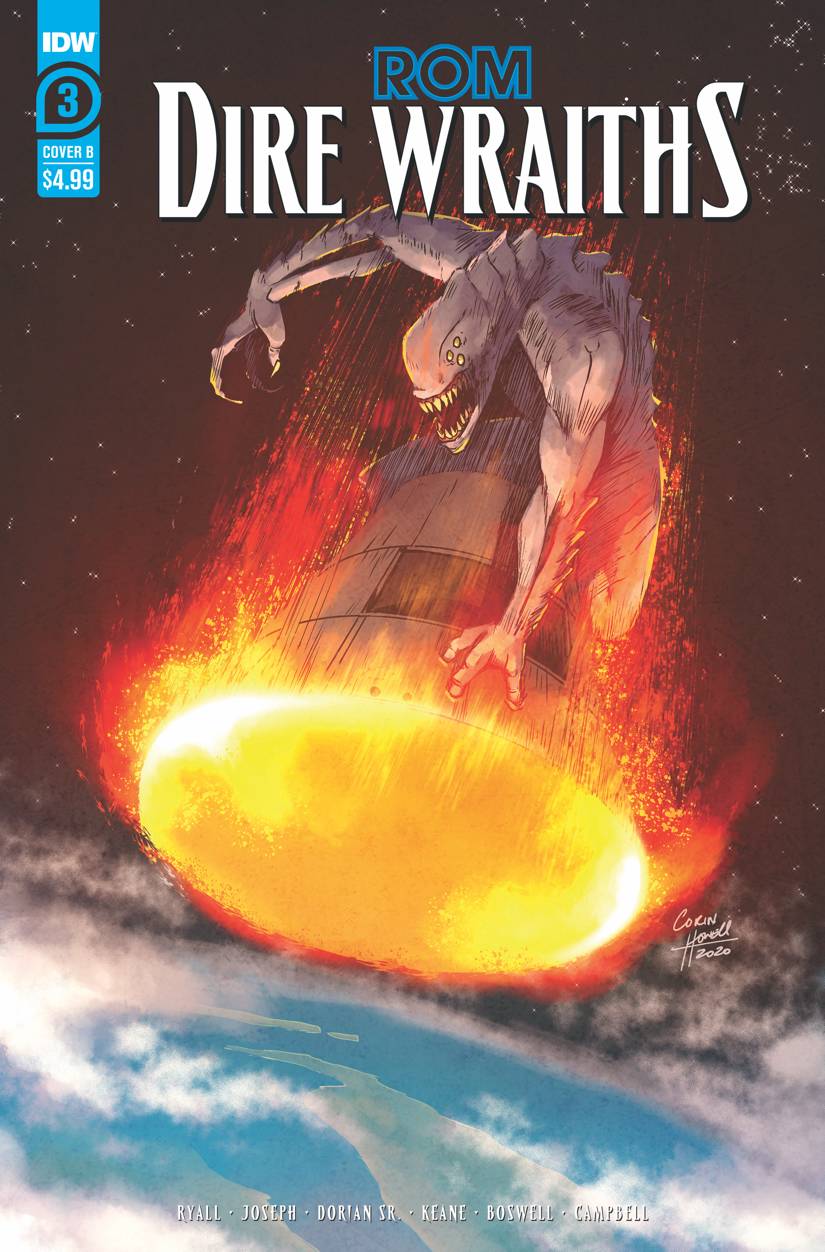 This mini-series adding value to the idea of how the Dire Wraiths came to Earth concludes this week.  All that stands between them and the Earth is crew of the first moon landing.  One small step indeed!

With one Wraith down the crew have something of a plan, same can be said of the Wraith on the moon and the one in the satellite.  Plans are afoot from all sides.  In the meantime, it may well come down to the arrival of a certain space knight to save at least part of the day.

Chris Ryall concludes this origins of sorts in a manner that plies on the simple of the premise of the overall Rom storyline.  That may well why Ryall’s writing feels like a study in exposition, explaining everything from actions to motives, which does make me question to whom this book is aimed.  Long time Rom fans may get some enjoyment out of the idea of this story, but in execution the dialogue can feel a little heavy handed.  Ryall also pens the second story as a kind of parallel to the first, though with Rom the main focus.

The main story has art by Ron Joseph who delivers detailed pencils, with some strong figure work added in for good measure.  Faces may not carry the same weight but they are passable.  The pace of Joseph’s art suffers under the weight of the expositional aspect of the dialogue.  Rom’s appearance is a tad too like the toy for my taste, maybe I have been spoilt by the old Marvel books and the always great Sal Buscema.  Colors are provided by Jim Boswell whose scheme gives the book a professional look.

The second story features art by Guy Dorian Sr. & Maria Keane who work takes a more cartoony approach in places, though carries less impact than the first half of the book.  Colors for this part are provided by Ross Campbell who maintains the quality of the colors from the first story.  Finally, letterer Shawn Lee pulls double duty for both parts, though with both featuring the “Rom, first of Solstar Knights salutes you!” speech, I wonder if letterers actually read what they fill word balloons with.

Back in the day, I had no idea that Rom was a toy; it was something that I didn’t see in the North East of England.  The comic on the other hand, felt like any other Marvel comic, not a tie-in.  The writing from Bill Mantlo and art by Sal Buscema was as serious as any other book of its time.  With IDW, I am not sure how they see Rom.  Is it a viable character and book or is it just another tie-in?  Maybe if this question could be answered then the book may find more traction than just a throwback to an old toy.