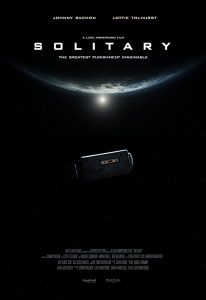 The most impressive thing about Solitary is how little resources were used to make it. It’s microbudget, finished remotely due to the pandemic, and still a good film.

Now, it does have a familiar premise. It’s a trapped in space, stranded kind of story. But the timing for it is pertinent. I can’t imagine this concept wasn’t at least partially inspired by self-isolation and quarantine. The entire movie, except for a few notable exceptions, takes place in one box, floating in space.

Now, I’ll say here I had assumptions about the movie when I began—concerns, really. I figured it would be a character drama that did little with the premise. Then, once I learned the main character was not alone in the box, and there was a girl in with him, I assumed a romantic story would have to unfold.

But none of that happens. Solitary has twists, its plans in mind, and swerves genres. It’s a different sort of plot and tells a stronger story than movies with bigger budgets and more locations could manage.

Constraints breed creativity, after all. This movie feels like if The Martian was paired with an episode of Star Trek and then given b-horror movie spice. The dangers of space play a constant aspect, as does social commentary. The pacing is kept buoyant by just how screwed our main two characters are by the constant space-related and not space-related dangers. They do pop up at random when the plot needs them, though. However, it’s probably not unrealistic how many things go wrong given the circumstances.

And, as to the characters, they are interesting. The exact nature of their backstories is not the deepest, but the acting carries it—at least with our two mains. Johnny Sachon (Isaac) has moments of quiet brilliance in his physicality, and, though campy, Lottie Tolhurst (Alana) genuinely comes off as unnerving.

Sadly, though, it’s not all sunshine here. The plot has a lot of characters who are only voices most of the time. They call in throughout, and some are just not good voice actors. Kathryn Vinclaire does a fine job as an AI helper, but the rest of the voices that chime in sound either too blasé or too salacious/sadistic. They keep the plot from monotony, but still, it’s notable.

This movie also shows its microbudget awkwardly at times. Special effects linger and don’t look good enough for how long we’re expected to stare at them. Space shots are not always moody, instead then feeling like screensavers. A CGI skyline shot is reused within a minute or two. The inside of the ship is by far the best of it, but you can only do so much.

These are minor things, though. It is worth seeing Solitary for its twists and as an impressive directorial debut for Luke Armstrong. The movie, if nothing else, manages to be thoughtful satire and communicates effectively impending destruction and death. The actors sell just how much they are floating in a tomb.

If you want spectacle, this isn’t your movie. If you want an introspective, new era Twilight Zone-style concept, with a little camp on the side, this is a fine way to spend an afternoon.