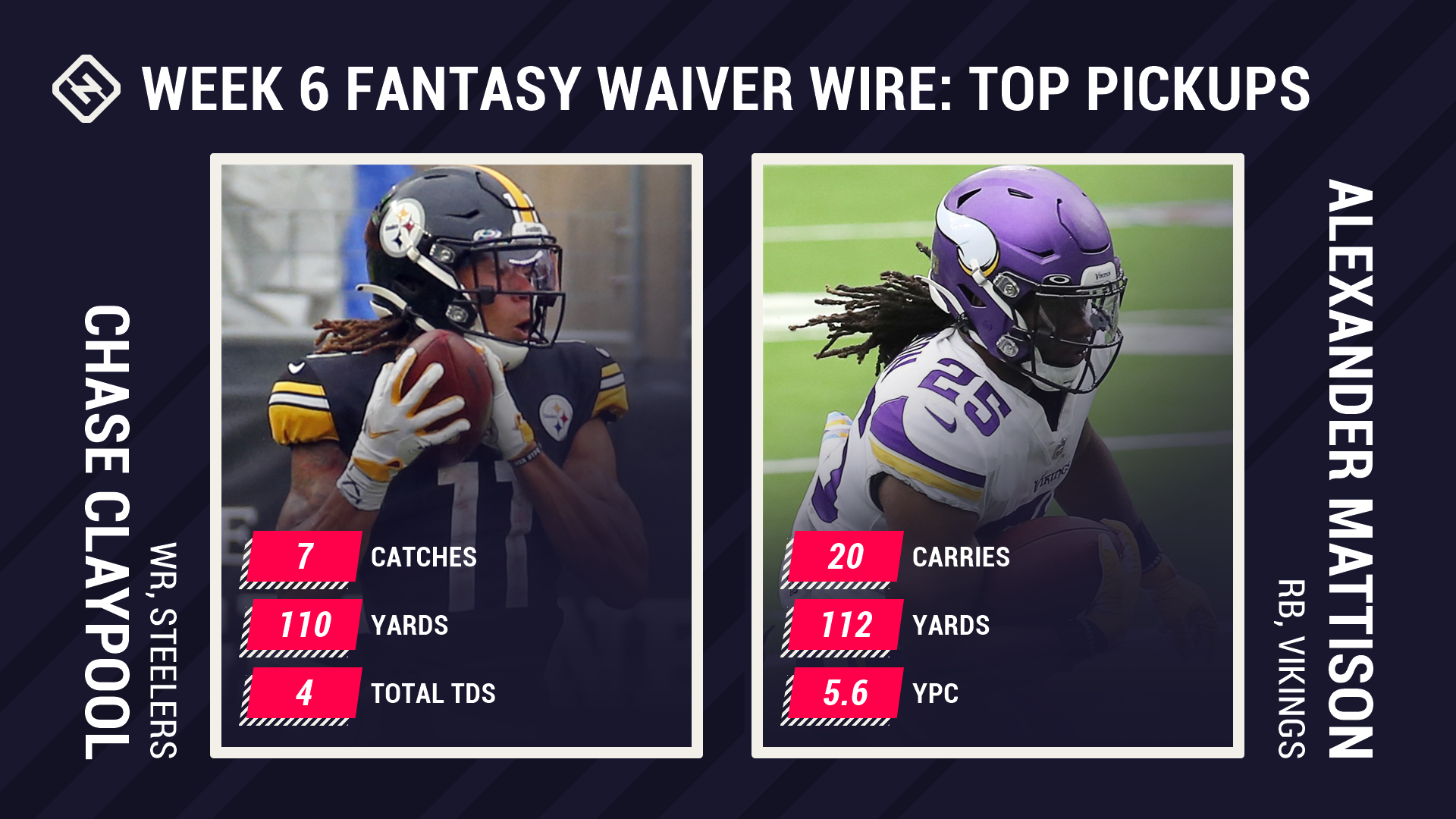 The top Week 6 fantasy waiver wire pickups and free agent adds present a classic good news/bad news situation. The good is that there were very few serious injuries this week to RBs and WRs; the bad is that means there aren’t many backups or handcuffs ticketed for more playing time. (Update: We spoke too soon. Dalvin Cook suffered a groin injury Sunday night, and even though he returned for a play, he could regress during the week, opening the door for handcuff Alexander Mattison.) That means we’re relying on young, breakout WRs like Chase Claypool, Henry Ruggs, and Travis Fulgham to carry the day, and fortunately that trio all went over 100 yards and scored, with Claypool having the fantasy performance of the season with four touchdowns.

There was one huge injury on Sunday, as Dak Prescott suffered a severe ankle injury that will surely keep him out for the rest of the season. His replacement, Andy Dalton, makes our full free agent list, which als features several more receivers worth stashing (Laviska Shenault, Brandin Cooks, Preston Williams, Keelan Cole, Christian Kirk), as well as some of last week’s breakouts who are still too lightly owned (Damien Harris, Justin Jackson, Tim Patrick). We also have QB, TE, and D/ST streamer suggestions if you’re worrying about bye weeks, injuries, or more surprise postponements. You can find the streamer suggestions at the end of this list. If you’ve recently split with your kicker because of irreconcilable differences and you’re looking for a hot new set of legs to hook up with, you can check out our Week 6 kicker rankings.

Even after Claypool’s monster performance, it’s tough to say if he’s worth using a high waiver claim on. If Diontae Johnson (back) is projected to miss time, that would enhance Claypool’s appeal, but otherwise, he’s still a rookie wide receiver who obviously just had his best game of the season. The Steelers have two other high-target wideouts and rarely throw downfield, so Claypool’s upside is pretty big-play dependent. Unless you really need WR help (or you had Prescott and need a starting QB), you’re better off saving your high waiver claim for a big RB injury. Chances are, Claypool will be claimed, though, so it might take a high one to get him if you really want him. Ruggs and maybe Shenault, depending on Chark’s status, could also be worth low claims, but unless any of last week’s holdovers (particularly Harris and Phillip Lindsay) are available, this is probably a week to save your claim and move up the waivers order. (Update: Mattison is worth using a top waiver claim on if Cook misses time.)

Alexander Mattison, RB, Vikings. Dalvin Cook looked like he suffered a serious groin injury early in the second half against Seattle, but the All-World back returned for a play before sitting out the rest of the game. Mattison ran wild in his place, racking up 112 yards on 20 carries. It’s unclear if Cook will miss Week 6 (or beyond), but there’s a good chance Mattison will have value regardless. If Cook is out, Mattison will be a must-start against the Falcons.

Chase Claypool, WR, Steelers. Claypool was on fantasy radars after catching a long touchdown in Week 2, but many will believe he’s ascended to must-start status after his four-TD outburst in Week 5. We won’t go that far, but Claypool is sure to be the top pickup of the week after hauling in seven-of-11 targets for 110 yards and three scores while adding another six yards and a TD on three carries. Claypool was undoubtedly aided by Diontae Johnson (back) exiting early, but either way, it’s tough to imagine the Steelers not utilizing him more going forward. With elite athleticism and good speed, Claypool is the Steelers’ best downfield threat, and they’ve shown a willingness to use him on at least a couple gadget plays every game. For fantasy purposes, it doesn’t hurt that Pittsburgh is already through its bye, and matchups against Cleveland, Tennessee, and Dallas in three of the next four weeks look good, too.

Henry Ruggs, WR, Raiders. Ruggs caught just two passes (three targets) against the Chiefs in Week 5, but both were spectacular plays, one of which went for a 72-yard touchdown. Perhaps the biggest news is that Ruggs, who’s dealt with knee and hamstring injuries this year, made it through the game in one piece. The explosive rookie is unlikely to be consistent, but after Vegas’s Week 6 bye, he’ll have solid matchups against the Bucs, Browns, Chargers, Broncos, Chiefs, Falcons, and Jets. Grab him now.

Travis Fulgham, WR, Eagles. We weren’t sure what to make of Fulgham after he caught two-of-three targets for 57 yards and a TD in Week 4, but he looks legit after hauling in 10-of-13 looks for 152 yards and a score in Week 5 against Pittsburgh. The 6-2, 215-pound journeyman is no sure thing to continue getting playing time with DeSean Jackson (hamstring) and Alshon Jeffery (foot) due back soon, but given the respective injury histories of both players (and relative ineffectiveness over the past few seasons), Fulgham is still worth stashing. After a tough matchup against Baltimore next week, Philadelphia has the Cowboys, Giants, bye, Giants, Browns, and Seahawks.

Andy Dalton, QB, Cowboys. Dak Prescott’s season-ending ankle injury pushes Dalton into a starting role, and the veteran is more than capable of putting up solid stats given his supporting cast. Dalton led the Cowboys on a game-winning fourth-quarter drive, completing nine-fo-11 passes for 111 yards on the game. Going forward, he has three straight netural-to-favorable matchups (vs. Cardinals, @ Washington, @ Eagles), so it’s not a bad idea to stash him in case he really takes off.