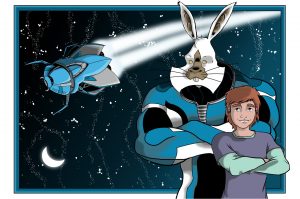 Megatomic Battle Rabbit Is Both Clever and Funny

Megatomic Battle Rabbit is a little out of my usual purview for a few reasons. The first simply because it’s a comic book. I’m predominantly a movie and television critic, but I know instances of good writing when I see it. 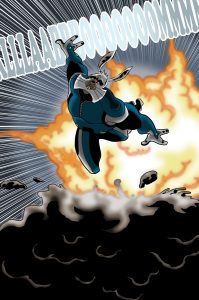 And this comic has something hard to do well: it’s funny. Not uproariously so, it’s hard to do that without the timing of speech, but it has a lot of little moments that are chuckle-worthy. Fish-out-of-water stories, especially ones that poke fun at human culture, are great. Not every joke or observation lands—and some are cliché or not funny—but it’s enough to be engaging.

But how is the actual story? Well, it’s a rather normal one. Our main character being a massive rabbit is different, but the ET style “alien crash-lands and young boy cares for them” concept has been done so much it may as well be its own subgenre. Battle Rabbit is a parody/pastiche of the concept, but even that has been done with things like Paul. I’m not sure any series can take advantage of this premise to its full effect anymore.

The other off thing about it is pacing. It’s so fast I thought maybe I was missing pages. This comic was originally four parts and reading it together as one makes it jarring. The way it was structured, Megatomic Battle Rabbit can make you assume stuff off-page. But laid out this way, Rabbit’s capture and subsequent imprisonment is almost out of nowhere. Foreshadowing is similarly spaced poorly. There’s a rhythm needed, and it’s not here. Though heaven knows how long it would take to draw enough panels, having the story elongated, expanded, and allowed more time would be great.  Both the comedy and the character-building would benefit from it highly. 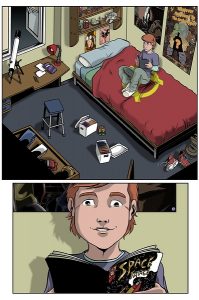 This is because of a lot of good snippets unexplored. Character connections are strong but severely rushed. The worldbuilding is excellent when we get it. Alien culture and biology come up occasionally and seem rather interesting but don’t get room. Offering a carrot being “racist” implies so much we don’t get explained.

I don’t want an info dump; I just want more. It should be graphic novel-length or become an ongoing series. If Megatomic Battle Rabbit is a proof of concept, the concept has been proven. Now give the world the full-blown character comedy nestled in its heart.

It’s a good start, and I want it to see its full potential. The writer has shown their talent here. I hope it gets the support to take it to the next level.