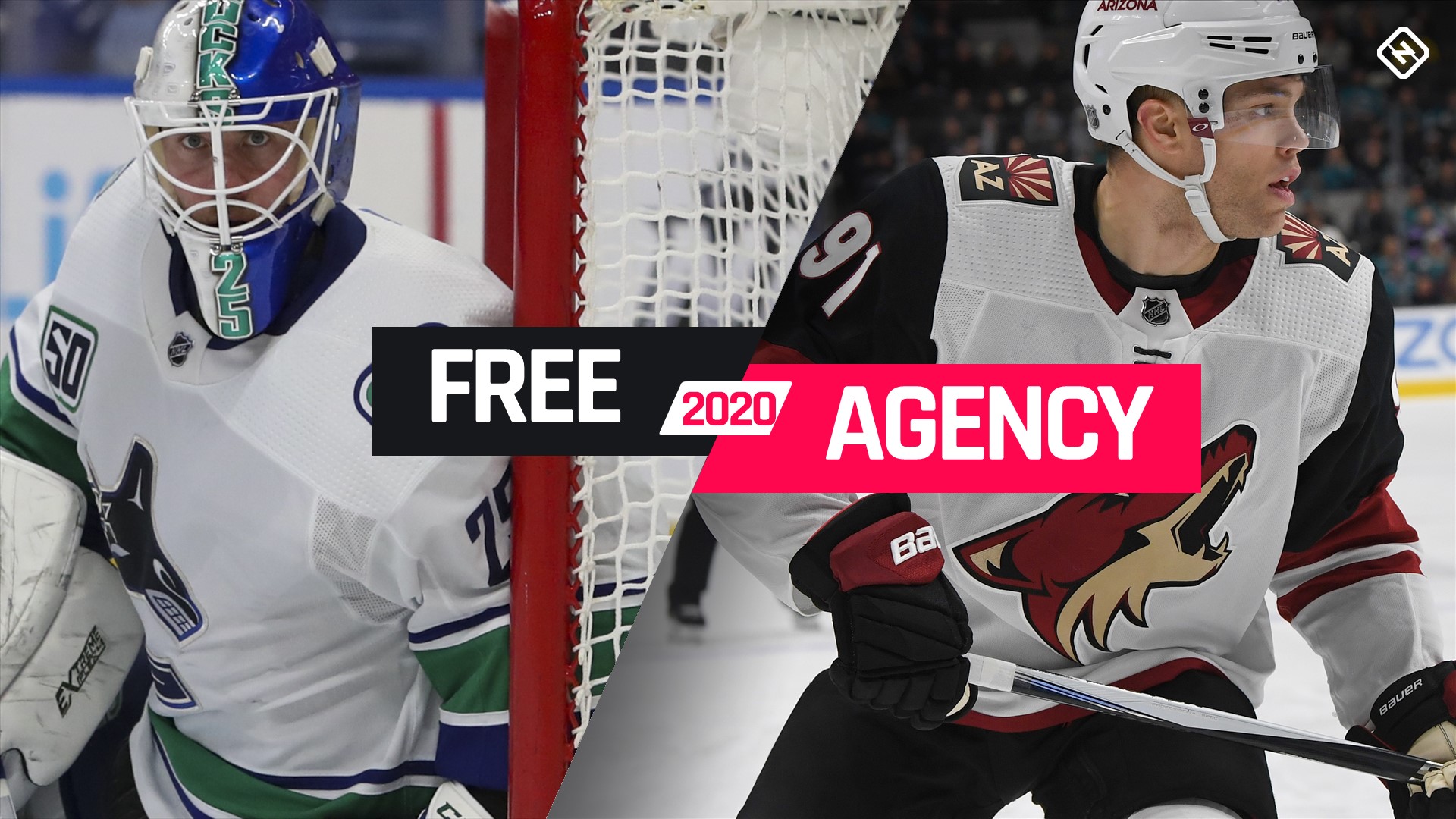 The 2020 NHL offseason is here and free agency should certainly be a doozy.

Some of the biggest names in the game — i.e., Alex Pietrangelo, Torey Krug and Taylor Hall — are available at the right price and term. And have you seen the goalie market? Henrik Lundqvist, Braden Holtby, Cam Talbot, Anton Khudobin and Jacob Markstrom are just some of the veteran backstops looking for new homes.

While a few teams need to reach the cap floor — looking at you, Senators — other teams have little wiggle room when it comes to adding pieces that could push them from pretender to contender or protecting their top restricted free agents.

With a flat cap amid a pandemic, what will go down is anyone’s guess. Either way, it’ll be quite a ride.

Sporting News has complete coverage as it tracks the latest NHL signing rumors and news as free agency opens.

SN’s analysis: A good get for the Flames as Markstrom is coming off a Vezina-worthy performance (he finished fourth in voting). It’s expected he’ll get the majority of the work in between the pipes and will help solidify a position that’s been a little shaky for a while in Calgary.

Michael Grabner informed teams today that he will likely wait to see when next season begins before making a decision on where he will play….that gives him more time to decide what’s best for him and his family.

3:09 p.m. — Stanley Cup champion Kevin Shattenkirk is on the move again it appears — and reportedly to the Ducks for three years.

Am told Kevin Shattenkirk won’t be returning to #tblightning. Tampa Bay offerred a three year deal late last night, but it was not enough and veteran defenseman got a lot of interest on UFA market

SN’s analysis: Veteran presence and adds a bit of grit on the blue line. Plus, he’s a good human.

The Toronto Maple Leafs and Vegas Golden Knights have spoken to Pietrangelo. Interesting to see who else steps forward.

2:34 p.m. — Penguins sign Evan Rodrigues. He was part of the Kasperi Kapanen trade and was not offered a qualifying offer by the Maple Leafs.

As per @SunGarrioch contract breaks down as:

Chalk this up to escrow.

SN’s analysis: Smart move by the Stars as Khudobin was not only well-liked in the locker room, but fills in nicely next to Ben Bishop in a 1A/1B role. Plus, as we all know now, he can be a full No. 1 if Bishop cannot go.

1:55 p.m. — Well, Khudobin is going home. According to TSN’s Frank Seravalli, he’s staying in Dallas at three years at $3.5 million per.

Still not finalized, some details to work out, but expected the Dallas Stars will bring Khubodin back on a three-year deal worth between $3M to $3.5M per season. https://t.co/mcnDAB8QXF

SN’s analysis: Holtby will be a fantastic 1A/1B with Thatcher Demko. The youngster will get a chance to play while Travis Green will have the Stanley Cup champion as a safety net. Plus this:

1 p.m. — Cam Talbot on the move to Minnesota. Calgary looking for a netminder now.

SN’s analysis: Cam Talbot is a solid netminder who had a stellar run during bubble hockey.

done now: one year, $1.5 M for Henrik Lundqvist with the Capitals, as @TSNBobMcKenzie predicted earlier today

SN’s analysis: Smart move by the Caps to add a veteran — Hall of Famer — to work with and push young stud Ilya Samsonov. The Capitals are also a team in win-now mode and Lundqvist is hungry to finally get that Cup.

Brian Burke just mentioned on Sportsnet that he’s heard one team is willing to offer a seven-year term to G Jacob Markstrom. If that’s the case, I think #Flames would shy away. Markstrom is 30.

SN’s analysis: Fantastic move for Toronto. GM Kyle Dubas repeatedly has mentioned since the Leafs were booted from the bubble that he wants his team to be tougher to play against. Translation: Sandpaper. That’s just what Simmonds brings. But don’t be fooled: He plays a gritty game but also has a scoring touch.

Simmonds on Sportsnet: “I can play the game – and at the same time I can punch your head off (1,123 penalty minutes). I’m a team-first guy. Anything that happens to the boys, I will be the first to jump in.”

SN’s analysis: Great move for both Ryan and the Red Wings. A guy with a knack for finding the back of the net during his career, he’ll add a veteran presence and will be a solid mentor to a young Detroit squad. For Ryan, it’s a fresh start.

12:06 p.m. — Bobby Ryan may be heading to HockeyTown. The Athletic’s Craig Custance reporting that it’s a one-year deal for $1 million.

Nothing is done until it’s done but the expectation is winger Bobby Ryan will sign a one year deal in Detroit when the paper work is completed. #Sens #NHLFreeAgency

12:06 p.m. — Sportsnet’s Anthony Stewart reporting Maple Leafs are getting their sandpaper. TSN’s Pierre LeBrun is saying it’s a one-year deal with a NMC for the Toronto native.

Tyler Johnson’s camp had extended his list of teams to 7-8 for Tampa but the Bolts couldn’t get a trade done. Now he’s on waivers. He’s got 4 x 5M aav left although his cash salary for next season is $3.75 M. Seattle-bound in a year?

Oliver Ekman-Larsson’s agent Kevin Epp tells me that OEL is staying with the Coyotes: “Time’s up.”

And is Oliver Ekman-Larsson now officially heading to Vancouver?

The Vancouver Canucks are hard at it this morning. It’s believed the Canucks have made another offer on Oliver Ekman-Larsson. Whether this results in a deal with Arizona TBD.

11:21 a.m. — Paul Stastny is heading back to the Jets. Vegas Golden Knights ship him to the Peg in exchange for defenceman Carl Dahlstrom and a 2022 conditional fourth-rounder.

SN’s analysis: No sleight of hand here. It’s pretty clear that Vegas is clearing cap space for something big. There have been rumors that the Golden Knights will be going after top free agent Alex Pietrangelo. The Athletic’s Jeremy Rutherford noted on NHL Network that it’s one of his, if not the top, destination choices for the defenseman.

As for Winnipeg, it adds center depth, specifically at 2C (something it’s been missing since Bryan Little went down; his future status is uncertain for now). Stastny knows Paul Maurice and his systems, as he spent a short time with the club following his 2018 acquisition at the deadline and potted 15 points in 17 playoff games. He also played and had success with  Patrik Laine, so it may signal the Finnish winger is sticking around.

11:07 a.m. — GM Jim Benning has repeatedly said that he wants to keep Jacob Markstrom between the pipes in Vancouver. NHL Network’s Brian Lawton says he’s heard a team has offered him seven years. Elliotte Friedman reports on NHL Network that Markstrom wants to stay in Vancouver but Calgary and Edmonton will make a push.

No last-minute deal with Florida, Mike Hoffman and his UFA-leading 29 goals this past season heads to the UFA market today. Door isn’t closed on the Panthers, but he will hear pitches from teams.

10:18 a.m. — What’s old is new. Sportsnet’s Elliotte Friedman reports the move will give Vegas a chance to go after Alex Pietrangelo.

#NHLJets are trading a 4th-round pick in 2022 and depth D Carl Dahlstrom, who has one year remaining at $850,000. @DarrenDreger was first to report the terms of the deal.

As we’ve speculated all week, I would expect Wayne Simmonds to get offers from Toronto and Montreal and possibly Calgary today. There are other teams as well but if I would handicap it at this hour, I would say those three Canadian teams have the best shot.

GM Jarmo Kekalainen making some space, could a big signing be in the works? They do have a few RFA’s like Pierre-Luc Dubois.

Sounds like the #NHLBruins have held firm on their 6 x $6.5 million offer to pending UFA D Torey Krug. He’s expected to hit the market tomorrow, but the Bruins have left the door open for them to reconnect once Krug sees what’s out there.

7 p.m. — The Canadiens lock up Josh Anderson for seven years.

SN’s analysis: It’s a lot of term for someone who has a history of injuries — Anderson missed most of 2019-20 following shoulder surgery — and has only played one full 82-game slate in his career. He also only has 115 points in 267 career games but does have some upside.

The deal also leaves Montreal without a lot of cap space in free agency, $5.368 million per CapFriendly  which compares his new deal to those of three Stanley Cup winners and the player who just won the Selke.

5:55 p.m. — We wouldn’t be surprised if Pietrangelo is back manning the blue line for St. Louis next season.

Pietrangelo tells @TheAthletic that he and the Blues have had contract talks.

“Yeah, we’ve had contact recently,” he said. “There’s been good discussions from both sides. So there’s been discussions, but we’ll see what gets presented tomorrow.” #stlblues

5:39 p.m. —  Cam Talbot was solid in net for the Flames in the bubble and would be a quality 1B for any team — maybe a Stars team that loses Anton Khudobin? Him going to market is expected; it has long been rumored that Calgary wants to court Jacob Markstrom.

Cam Talbot’s camp had more talks with Calgary today. Sounds like he’s headed to market based on current gap in contract talks. Obviously that can change in next 24 hours.

With Justin Williams’ retirement, no sign of interest from Dustin Byfuglien to continue his career. He met with #mnwild GM Bill Guerin for lunch 3 wks ago, but appears to be hanging ’em up.

Meanwhile, all indications are Patrick Marleau wants to return for a 23rd #NHL season.