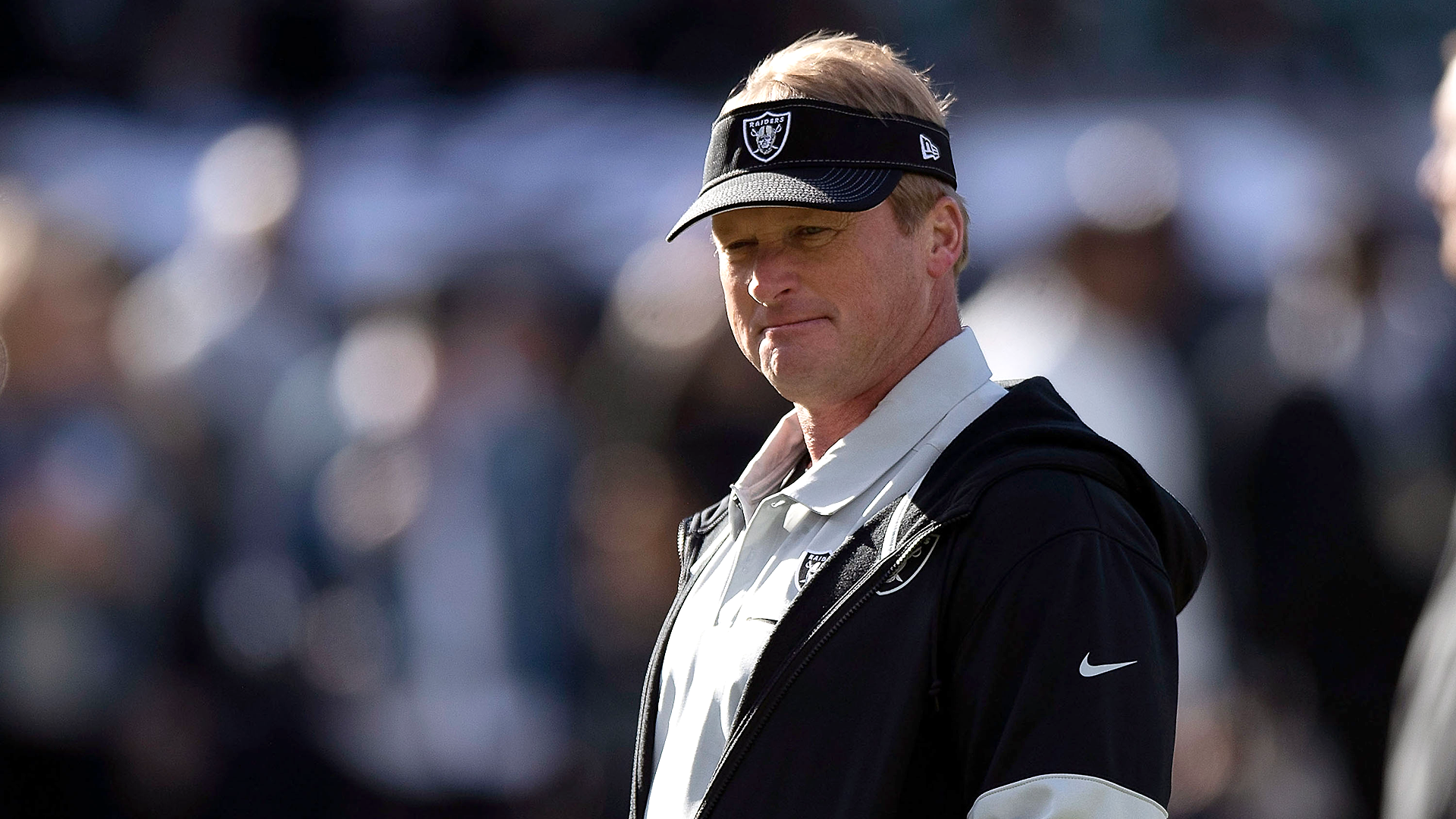 Jon Gruden has made headlines in 2020 for his inability to keep a mask on his face. Back in early 2002, that concept would’ve confused everyone. Gruden was in the news for a different reason: A head-coaching trade from the Oakland Raiders to the Tampa Bay Buccaneers.

Head-coaching trades aren’t common now, but two decades ago, a few of the biggest names in coaching (Gruden, Bill Belichick, Bill Parcells) were involved in such maneuvers. It had near-immediate consequences in 2002, because the opponents in the Super Bowl at the end of that season were the Raiders and Buccaneers, with Gruden coaching against his old team.

Here’s a look back at what went into the trade of Gruden ahead of another Buccaneers-Raiders matchup featuring Gruden in Week 7 of the 2020 season.

MORE: The NFL’s highest-paid coaches in 2020

Those picks turned into 21st and 53rd overall in 2002, 32nd overall in 2003 and 33rd overall in 2004. While the Raiders didn’t keep all the picks, the players selected at those spots were TE Daniel Graham, OT Langston Walker, DE Tyler Brayton and RB Tony Hollings (in the 2004 supplemental draft by Houston).

The players that ended up with Oakland thanks to those draft picks were Walker, Brayton, CB Phillip Buchanon, LB Sam Williams and WR Ryan Hoag.

Obviously times change, circumstances evolve, etc. But it’s amazing to think that in 2002, the Raiders got more for Jon Gruden in a trade (2 first-rounders, 2 second-rounders and $8 million from the Bucs) than they did today for Khalil Mack.

Why did the Raiders trade Jon Gruden to the Buccaneers?

The Buccaneers fired Tony Dungy early in 2002 (following the 2001 season) after they reaching the playoffs for the fourth time in six years but still couldn’t break through to reach the Super Bowl. Five days after Dungy was fired, the Raiders lost to Tom Brady and the Patriots in the “Tuck Rule” game. Both teams were set up for a change.

According to ESPN, a lot of Tampa Bay’s choices didn’t work. Bill Parcells stayed retired, and they didn’t hire anyone on an impressive interview list that included Marvin Lewis, Nick Saban, Mike Mularkey and Norv Turner. ESPN reported that the Glazer ownership family in Tampa Bay wanted an offensive-minded head coach to pair with Monte Kiffin. The initial asking price for Gruden, once that idea was raised, was the four picks that eventually moved along with Warren Sapp, according to ESPN.

Gruden’s contract was close to up in Oakland, so he was open to the move, and early in the morning on Feb. 18, 2002, the deal was complete.

There were a number of Tampa Bay connections for Gruden, so the move made sense from his perspective, and Al Davis moved on from a coach who was ready to move on. Gruden had family in the Tampa Bay area. His father, Jim, had been an assistant coach for the Bucs in the ’80s. And Gruden’s brother, Jay, went to high school in the Tampa area.

Wide receiver Tim Brown told ESPN that he thought Gruden had given the Raiders a deadline to move on from him, which may have accelerated the move. Trading head coaches wasn’t uncommon at the time — Bill Belichick was involved in a coaching trade from the Jets to the Patriots in 2000, and Parcells had been traded in 1997.

Whatever the overall combination of reasons, Gruden ended up filling the coaching void in Tampa Bay. The Raiders promoted offensive coordinator Bill Callahan to head coach. Gruden and Callahan would meet up again soon enough in Super Bowl 37.

Who won the Jon Gruden trade?

We’ve definitely got plenty of hindsight to judge the winner and loser of this deal. None of the four picks given up by Tampa Bay turned into a star, and it didn’t just get Gruden in return, as it turns out.

Following the 2002 season, Gruden’s first year at the helm in Tampa, the Buccaneers won the Super Bowl. They put a beating on none other than the Oakland Raiders in a 48-21 victory in Super Bowl 37.

Tampa Bay ended up firing Gruden after the 2008 season, and he’s now made his way back to the Raiders franchise in Las Vegas after a detour in the “Monday Night Football” broadcast booth. But trading for Gruden in the middle of the night likely brought sweet dreams of hoisting the Lombardi Trophy to the Glazer family, and less than a year after the deal, that’s exactly what happened. That’s the biggest win they could’ve gotten in a trade.