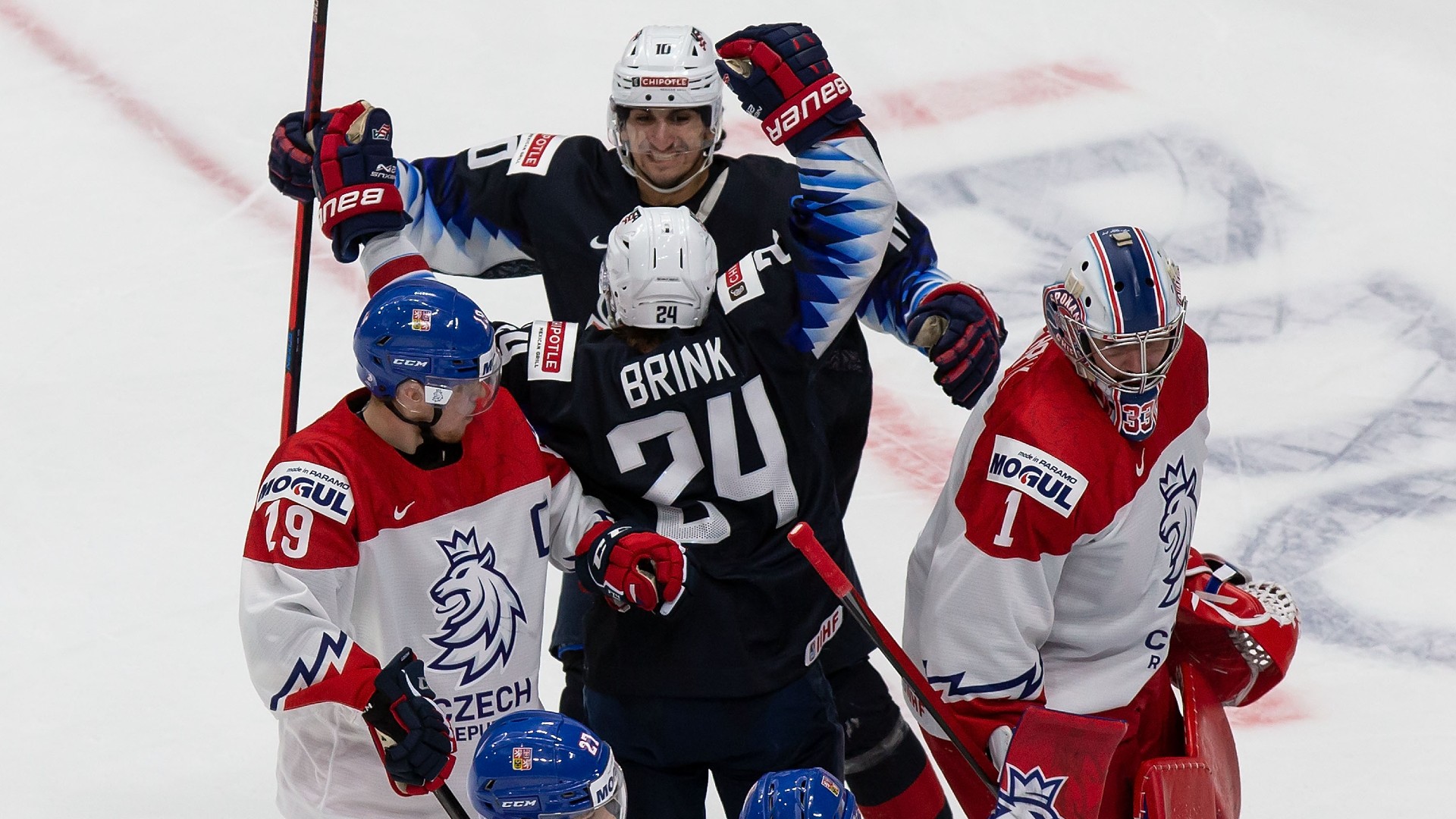 Entering Tuesday’s contest with the Czech Republic, the Americans had played two games on opposite ends of the spectrum. Game 1 showcased a team struggling to play a full 60 in a 5-3 loss to Russia. Game 2 was a dominating 73-shot, 11-goal shutout of Austria less than 24 hours later.

And in Game 3 against the Czechs, the Americans continued their winning ways with a solid wire-to-wire 7-0 win. Trevor Zegras led the way with five points (two goals, three assists) while Bobby Brink was named Player of the Game backed by his two-goals. His future Flyers teammate, USA captain Cam York, chipped in three assists. Also adding to the goal party was two guys head coach Nate Leaman would love to get going in Cole Caufield and Arthur Kaliyev. The pair scored consecutively in the third period on two rips from the circles; Caufield also had an assist on the game’s capper by Matt Boldy.

Spencer Knight also had a solid bounce-back game in between the pipes. The Panthers prospect struggled in the team’s loss to Russia, allowing four goals on 12 shots. Against the Czechs, he pitched a 22-save shutout that including stoning Michal Teply right on the doorstep. Teply, a Blackhawks draft pick in 2019, led the Czechs with six shots on net.

Lukas Parik, who backstopped the Czechs to a shocking 2-0 win over Russia on Sunday, was originally slated to be the backup. He ended up starting with a last-minute lineup change and proceeded to allow seven goals on 30 shots. Nick Malik, the son of ex-NHLer Marek, relieved him late in the third and stopped both shots he saw.

The U.S. is now officially in the quarterfinal round; however, seeding is still up for grabs. They’ll face a tough Swedish team to close out a New Year’s Eve tripleheader.

Sporting News had all the action as the United States and the Czech Republic battle it out in Group B action.

4:19 p.m. — Trevor Zegras comes close to the hat trick but rings it off the post on the power play.

4:17 p.m. — Alex Turcotte makes the pass around the pack of the net and gets nailed by Radek Kucerik. Turcotte is down and skates off slowly after the trainer comes out.

4:16 p.m. — Czech’s get two great scoring chances up close but Spencer Knight gets the pad down.

4:12 p.m. — Delay of game handed out to the Czech bench. Possibly because they wanted to make a goalie change and something got crossed up.

4:10 p.m. — GOAL. Cole Caufield (MTL) picks the puck up and just buries it from the bottom of the right circle. His first of the tournament too.  USA leads 6-0.

3:56 p.m. — USA keeping the pressure on as the ice continues to tilt their way.

3:32 p.m. — Under a minute left and Spencer Knight (FLA) makes his best save of the game as he robs Michal Teply (CHI) all alone after the puck popped out to him.

3:25 p.m. — GOAL. Bobby Brink (PHI) on the doorstep with his stick on the ice (always a good thing) and a defenseman on him bangs in the perfect Matthew Beniers pass. USA leads 3-0.

3:22 p.m. — GOAL.  After coincidental minors and 4-on-4 action, Henry Thrun (ANA) feeds a wide-open Trevor Zegras (ANA) in the right circle and he buries it with Parik out of position. USA leads 2-0.

3:13 p.m. — Drew Helleson (COL) with a shot from the high slot and Parik makes the stop but gives up the rebound. USA not there to capitalize but are flying in this middle frame.

3:08 p.m. — GOAL. Brett Berard (NYR) gets his initial shot blocked but his second attempt squirts through Parik and dribbles into the paint. Bobby Brink (PHI) jumps on the loose puck and buries it. USA leads 1-0.

3:07 p.m. — Spencer Knight with another good stop but his rebound goes out into the middle

3:05 p.m. — Matthew Beniers is absolutely flying in the offensive zone. He’s available in the 2021 draft.

2:37 p.m. — Wow. Czech’s with a great chance but just can’t connect on what would have been a slam-dunk goal. A royal road pass to a wide-open Michal Teply (CHI) who can’t finish at the far side.

2:22 p.m. — Ryan Johnson (BUF) called for tripping. Per NHL Network’s Dave Starman, USA was worried about the Czech’s embellishing calls … and it was close.

2:15 p.m.  — Matthew Boldy with a good chance on the doorstep as he gets two good looks.

2:14 p.m. — Adam Raska (SJS) takes Cole Caufield (MTL) into the boards by the Czech’s bench — with a little extra — and gets two for roughing. Entering the game, Team USA is 3-for-7 with the man advantage.

2:12 p.m. — Off a turnover, Brett Berard (NYR) with a good chance. Then a mad scramble but the Americans can’t bury it despite Parik out of position.

2:10 p.m. —  Some explanation from head coach Nate Leaman on why Spencer Knight (FLA), and not Dustin Wolf (CGY), is between the pipes for this one.

Leaman said @usahockey plan at outset was to play Knight, Wolf, and Knight — in that order — over the first three games. And they are sticking with it. @NHLNetwork

Leaman said he really liked Brock Faber (LAK) with Cam York (PHI) and expected that duo to play a big role going forward. USA looks to have solidified 3L with Berard (NYR)-Farinacci (ARI)-Brink (PHI). LaCombe and Knight get a chance to bounce back from rough outings vs. RUS.