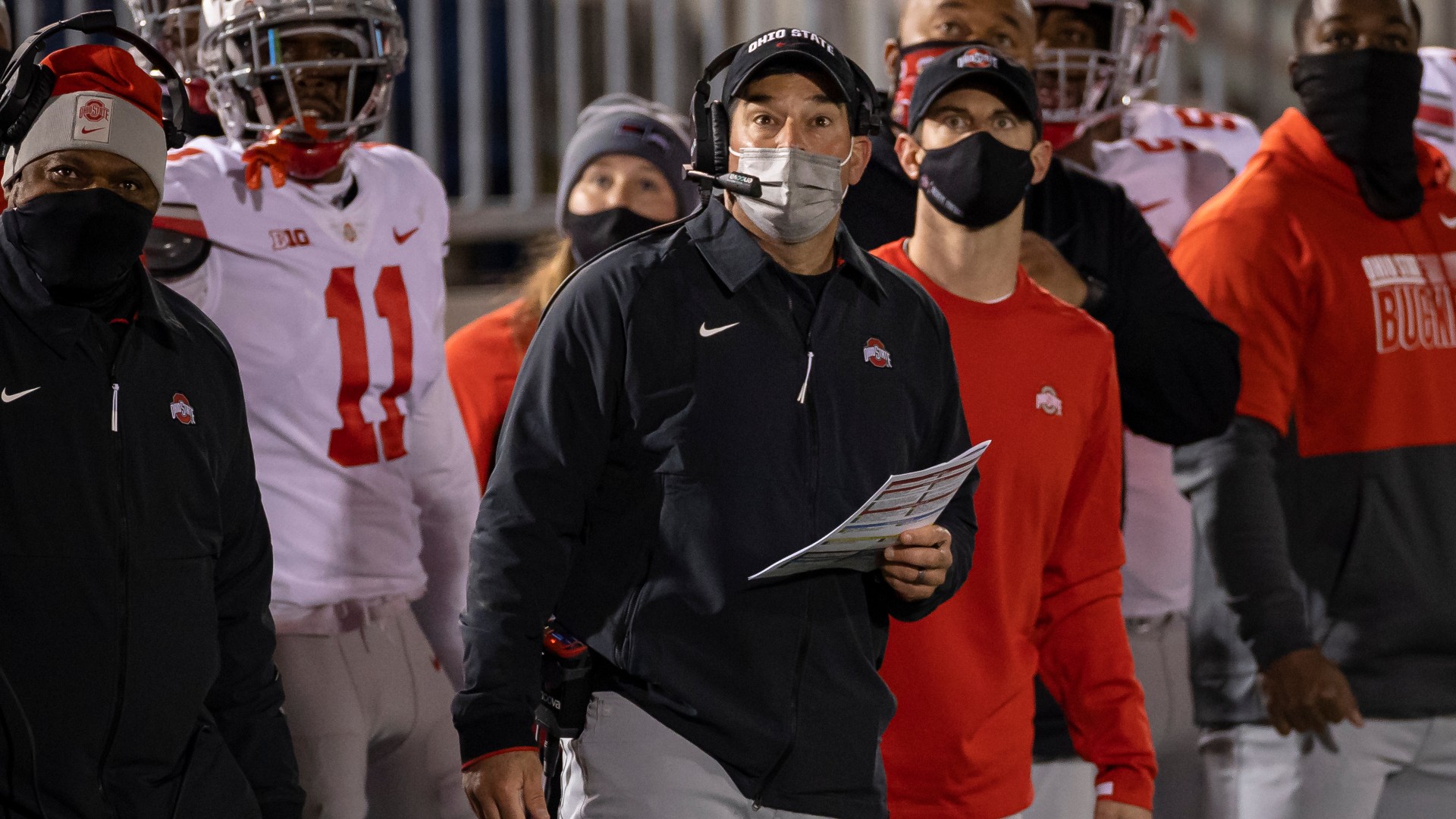 No. 4 Ohio State canceled Saturday’s game with Illinois after more positive tests for COVID-19 within the program were discovered Friday afternoon.

The university’s athletic department has paused all football-related activities.

MORE: How long is Ryan Day out after positive COVID-19 test result?

Under the current rules, Ohio State must play six games to be eligible for the Big Ten championship game. Here is a closer look at the Buckeyes’ outlook for the remainder of the 2020 season.

Why was the Ohio State-Illinois game canceled?

Ohio State did not disclose the number of positive COVID-19 tests on the team, but as of Friday afternoon the team was planning to travel to Illinois on Saturday morning for a noon ET (11 a.m. CT) kickoff.

No word on if they’ll fly with their shoulder pads on.

That was the plan, even after it was revealed Ohio State coach Ryan Day tested positive for COVID-19 and would not make the trip. Defensive line coach Larry Johnson was set to coach the team.

Ohio State announced late Friday evening that the game was canceled after an increased number of positive tests.

“We have continued to experience an increase in positive tests over the course of this week,” Ohio State athletic director Gene Smith said in a statement released by the school. “The health, safety and well-being of our student-athlete is our main concern, and our decisions on their welfare will continue to be guided by our medical staff.”

Yes, but there is no margin for error now. The Buckeyes have had two games canceled this season. The Nov. 14 game at Maryland was canceled because the Terrapins were forced to go on pause because of COVID-19.

The Big Ten decided to return to play on Oct. 24 after postponing the season, which meant the schedule left no room for bye weeks. Ohio State has an undetermined number of players who cannot return to action until 21 days after their positive test, per Big Ten COVID-19 guidelines.

Wisconsin has missed three games this season and will not be eligible for the Big Ten championship game. That might not affect the Big Ten West Division race because the Badgers lost 17-7 to Northwestern on Oct. 21. The Wildcats are 5-0 heading into Saturday’s game against Maryland.

Ohio State is the lone undefeated team left in the Big Ten East. The Buckeyes beat Indiana (4-1) — the second-place team — in a 42-35 shootout at Ohio Stadium last week.

Ohio State-Illinois is canceled. If the Michigan State or Michigan game is canceled, the Buckeyes will not be eligible for the Big Ten championship game.

Ohio State has two games left on its regular-season schedule. The Buckeyes are slated to play at Michigan State on Dec. 5 and close the season at home against rival Michigan on Dec. 12. The Spartans have had one game canceled because of COVID-19. The Wolverines have played all five of their games.

Per the university, the Buckeyes “will resume its team activities when its medical staff determines it is safe to do so based on protocols established by the Big Ten Conference.”

The Big Ten championship game is scheduled for Dec. 19.

Could Ohio State make the College Football Playoff without playing in the Big Ten championship game?

That is going to be an interesting debate if Ohio State does not meet the six-game requirement in the Big Ten. If the average number of games in the conference is eight or seven, the the Buckeyes’ hopes to play in the conference championship game would be dashed.

Ohio State could, in theory, still play a sixth game on Dec. 19 against another Big Ten school given the conference had planned that all the conference schools would play a cross-division game on the final weekend. If that were the case, Wisconsin would likely be the best opponent.

The Buckeyes have yet to lose a Big Ten conference game under Ryan Day and are the highest-ranked team in the conference. If Ohio State were to play six or seven games and stay unbeaten, then it could make that case even if it did not make the trip to Indianapolis.

Would that be enough to sway the committee to allow the Buckeyes — who have made the College Football Playoff four times since 2014 — to be part of the four-team field? Would that have more weight than, say, an undefeated Northwestern team that does not play the Buckeyes?

Will this be settled on the field?

That is to be determined. Wisconsin and Maryland both missed two weeks of games when their programs went on pause because of COVID-19.

The Buckeyes do not have the benefit of a bye week, and the CFP made a statement by putting Clemson (7-1) ahead of Ohio State in the first set of rankings.

Ohio State is the three-time defending Big Ten champion, has a returning Heisman Trophy finalist in Justin Fields and is the most talented team in the conference.

That also is to be determined, but it’s going to be a heated argument.

A playoff berth might be out of Ohio State’s control at this point. This is yet another tough decision for the conference and the CFP committee in a season affected by the COVID-19 pandemic.

Things will only get more complicated if the Buckeyes miss another game.