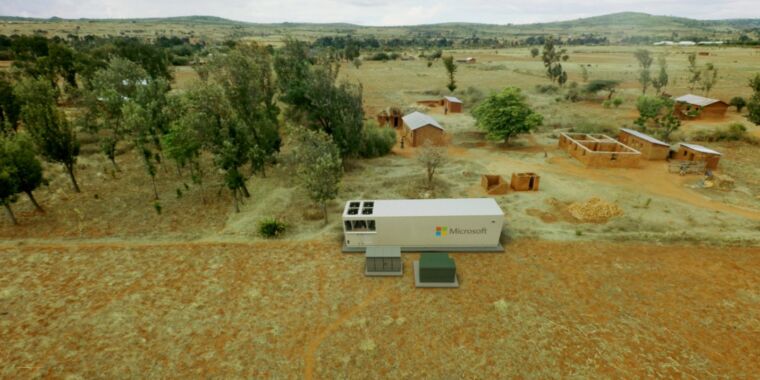 Microsoft today unveiled a modular data center that can be deployed to remote areas, as well as a partnership with SpaceX to connect those data centers to the Internet with Starlink satellite broadband. Microsoft said the Azure Modular Datacenter (MDC) is “for customers who need cloud computing capabilities in hybrid or challenging environments, including remote areas” for scenarios such as “mobile command centers, humanitarian assistance, military mission needs, [and] mineral exploration.”

The MDC is “a self-contained datacenter unit” that “can operate in a wide range of climates and harsh conditions in a ruggedized, radio frequency (RF) shielded unit,” Microsoft said. It can be deployed in areas “where temperature, humidity, and even level surfaces” would normally pose a big problem.

Bringing Internet connectivity to remote areas is often a challenge, and that’s where SpaceX comes in. Microsoft is also using SES satellites as part of what it calls a “multi-orbit, multi-band, multi-vendor” approach to connectivity. MDCs will be able to use satellite service either as a backup or as the primary Internet connection.

“We can connect via satellite links any element on the Earth to another point on the Earth,” SpaceX COO Gwynne Shotwell said in a video with a Microsoft executive describing the new partnership. Microsoft’s MDC can be “put anywhere on Earth, [but] you need to get that data somewhere else,” she said.

“Having a satellite-based system, you can get there without fiber,” Shotwell continued. “You basically talk to the satellites we have in orbit, the satellites will talk to each other and get that data to the other point on Earth where it’s needed.”

Starlink is providing “latency far below 40-50ms round trip to [the] Internet,” SpaceX told the Federal Communications Commission in a filing this month. Speed tests conducted by Starlink beta users recently found latencies ranging from 20ms to 94ms.

Starlink isn’t ready to connect any two points on Earth just yet. The company has launched over 700 satellites, but an ongoing customer beta for US customers is only available in Washington state. Even the “fairly wide public beta” teased by SpaceX CEO Elon Musk a couple weeks ago will only be for the northern US and likely southern Canada. But SpaceX is regularly launching new satellites, 60 at a time, and has US permission to deploy nearly 12,000.

Microsoft also designed and built an underwater data center, though that doesn’t seem to be part of the Microsoft/Starlink collaboration.

While SpaceX satellites use low-Earth orbits, Microsoft is also partnering with SES, a provider of medium-Earth orbit satellites. Here’s how Microsoft described its collaboration with SES:

SES worked with the Microsoft Azure team to demonstrate a simulated fiber outage at an MDC, and the network was able to automatically switch from fiber to SES’ satellite connectivity into Azure. The two companies are developing solutions in which SES provides connectivity or resiliency to terrestrial connectivity to autonomous MDCs at speeds of multi-hundreds of megabits per second (Mbps) today and scalable to multi-gigabits per second with O3b MPOWER, SES’s next generation communications system.

Under the Azure Orbital agreement, SES will be both a Microsoft partner, building gateway infrastructure, and customer, as it will be co-locating its MEO O3b mPOWER teleports with Azure datacenters. Together the companies will support connectivity between cloud datacenter regions and cloud edge devices, enabling direct “one-hop” connectivity to Azure.

Microsoft said its MDC will be able to switch from non-satellite to satellite connections automatically:

This connectivity is achieved through a network high availability module which continuously evaluates network performance. In the event of a network disruption, the network high availability module will move traffic from the impacted network to a backup satellite connection. This resiliency ensures continued delivery of essential hyperscale services through Azure. Alternatively, MDC can use satellite communications as the primary connection where no other network is available.

The MDC can also run in a “completely disconnected” mode in scenarios where Internet connectivity isn’t needed, Microsoft said.

Microsoft said MDC units “are in early use with defense and private sector organizations” but didn’t say when they’ll roll out more widely. The company said businesses should “contact your Microsoft representative” if they’re interested in the technology.

SpaceX recently won a contract with the US Space Development Agency to build new satellites—separately from Starlink—to “provide missile tracking data for hypersonic glide vehicles and the next generation of advanced missile threats.” Microsoft today said it is joining that project as a SpaceX subcontractor and that the two companies plan more collaborations.

“While the two companies expect to serve government customers, particularly in defense and intelligence, they foresee growing satellite connectivity and capability opportunities throughout the private sector in areas including telecommunications, energy and agriculture,” the Microsoft announcement said.