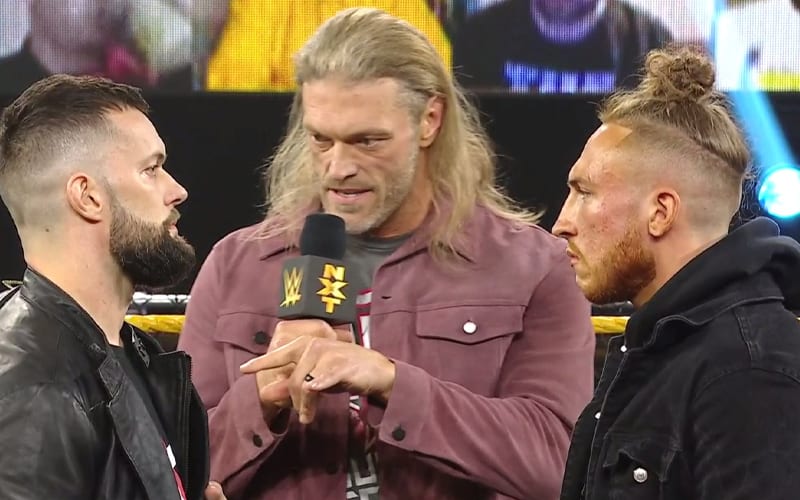 Edge showed up in NXT to tease going for the NXT Championship. This could be a very exciting match, no matter who is the champion. According to Triple H, Edge has already told him who he wants to face.

During the TakeOver conference call, Triple H was asked about Edge working for the black and gold brand. He said that Edge has already told him about a few people in NXT who he wants to face.

“He really is in a place in his mind where he wants to build young [talent] and just get them rolling in different directions. He has been talking to me, since prior to coming back the first time at the Royal Rumble, over a year ago, of coming to NXT and not only stepping in the ring and talking, but stepping in the ring and performing. Prior to him even coming to the Rumble he sorta kinda gave me ‘here’s my list; I’d like to work with this guy, I’d like to work with him, I would love to come here and work with this person.’”

“Since where he’s at you know that youth is exciting, their enthusiasm , their passion for this their drive, their desire and I think when he came to NXT . . . I could see this smile on his face all day as he went around and he was talking to these guys and girls and it’s awesome to see. So I don’t think any of it is beyond the realm of possibility . . . one way or the other, depending on where WrestleMania goes, beyond that, I think there’s a possibility for him to come to NXT and sort of use his star power to one: help them and elevate but also to have that final few chapters of his career . . . that’s something he’s not only willing to do, but really pushing hard to do.”

Edge is in line for a marquee WrestleMania match. We’ll have to see which champion he picks to face. You can click here for a spoiler on that.

The Rated R Superstar has plenty of opponents that he wants to face all over WWE. He also only signed a limited deal for this new contract. The amount of talent and the potential for great matchups might convince him to stick around a bit longer.